Hello all, and goodbye to 2016. This week, I have the honor of being the last to post at Smart Women Write before we all take a break until the New Year. For this momentous occasion, I have decided to share some art works by women that have resonated with me as of late, as we go into the New Year. We need strong women in our lives, more than ever. And we need art. These are a few of the many art works that have moved me this term by the way of their incisive messages. So consider it a holiday gift of sorts: a small collection of art works that each, in their own way, urgently confront the challenges we face today.

Twice in the span of 1964-1965, Yoko Ono knelt on a stage with a pair of scissors by her side and invited the audience before her to come up and cut away pieces of her clothes to take with them. After her initial verbal instructions she sat silently, for the most part ignoring those with the scissors, as each chose where to cut, which piece to take, and how, by effect, her bare body would be exposed. In so doing, she reversed the conventional dynamics of art making, allowing the audience members to take control of the work with unsettling results, as can be seen in the video of the second performance, in New York City.

This work can be read in many ways – as a commentary on art making, as a meditation on vulnerability, or as an act of  ritual memorialization by an artist who regularly used the concept of gift giving to honor the trauma of her own people at the end of WWII.

Or it can be read as it has been over and over again by feminists especially – as a searing metaphor for women’s experiences in patriarchal society.

By coincidence of scheduling, I ended up showing this work to my class mere days after the Access Hollywood video where Trump bragged about sexual assault came out. Although this work has always had resonance in my class discussions before, within this context it took on a far more urgent tone. For one of my students – a woman old enough to remember the feminist movement – the video seemed so real, as she put it, that it brought her tears. Indeed, for me too, there was something almost triggering in the experience of talking about this work so close to seeing that Trump video – and so close to seeing the awful debate that followed that news, too. Then and now as I reflect on the work, I am reminded of Clinton, standing there on stage as Trump loomed behind her. Few art works seem to visualize immobilizing power of misogyny so aptly, then and now.

Suzanne Lacy and others, Three weeks in May, 1977

Perhaps no one blurred the lines between art and activist within the Feminist Art Movement more fully than Suzanne Lacy in the collaborative work she spearheaded known as Three Weeks in May. This was a multidimensional performance and direct action work held across Los Angeles to draw attention to rape crimes in that city in the spring of 1977. At the center of this work is this 25 foot map, posted in the City Mall Shopping Center – where every day during the installation, Lacy would use a large red “RAPE” stamp to mark locations where rapes had been reported the previous 24 hours. The actions, events, and projects produced during Three Weeks in May” included a self defense class, and several collaborative performance installations. Lacy’s work is a model for how art can extend beyond the art institution to do the work of activism and outreach. But it is also a work that I often have trouble teaching because I  hate how much it still resonates 40 years later. 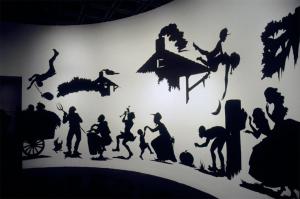 This work is one of a series of installations that Walker made in the late 1990s, all of which are comprised of life-size silhouette narratives that depict violent and grotesque representations of the antebellum south. The images are at once fantastical and nightmarish – the story book aesthetics of the silhouette combining with brutal, and often sexually explicit, scenes. In an Art21 interview, Walker talks about using the silhouette, which was a common technique for 19th-century portraiture, as a bridge to the antebellum past. Her works are about the blurry line between that history and the fictive landscape of the south found in such works as Gone with the Wind that continue to distort the history of race, gender, and power in this country. Her work is a project of unearthing. In some works, she also actively implicates the viewer through projections that cast their shadows’ on the images.

This photo is a self portrait by Catherine Opie from 1993 that she made 3 years before the Defense of Marriage Act (DOMA) was passed, in the midst of debates about same-sex marriage. Etched on her back – raw and still bleeding in a visual language that evokes the innocence of a childhood dream – is the longing for acceptance within mainstream society as part of a same sex couple. Every time I see this work, it makes me wince. I tend to see this work as an invitation for empathy through the visceral language of a physical wound, but the image also recalls a darker history of branding.

Throughout her career, Opie has used self portraiture as a marker of changes in her personal life. You can find portraits of her in her younger years related to her membership within San Francisco’s queer leather subculture. And in 2004, she produced a monumental sequel to this work of herself nursing her child. The last time I taught this work in a class before this term was not long after the Supreme Court made marriage equality legal nationwide. I recall talking about it as a marker of how far we’d come. This term, when I taught it a few weeks after the election, the work was haunting.

In my last post, I wrote about the enduring resonance of Zoe Leonard’s work I Want a President, made during the 1992 election, but currently on display on the High Line in New York City. As we go into the new year, I’ll likely return to this work, for in it is a demand that we state clearly just what we do and do not want in our leaders. As Chimamanda Ngozi Adichie wrote recently in The New Yorker, now is the time to speak with clarity and conviction. Leonard is one of many activist artists who shows us how it’s done.