All 3 members of Smart Women Write participated in #WomensMarch across the U.S. We’ve joined together to recap our experiences here to tell the story of 3 Americas that aren’t in the Northeast.

In November, I made plans to go to the march in D.C. I had a bus ticket with some great folks, but a week ago my life got a little crazier than I expected. It wasn’t anything major or particularly bad, but it was enough to make me rethink my plan.In the end, it felt amazing to be here in St. Louis surrounded by so many like-minded people. The energy was incredible: it was just what I needed after a couple of long, dreary, politically stressful months.

My friend and I arrived nearly 2 hours early, which was one of the best parts; we really loved was watching everyone stream in. The creativity behind the signs was incredible, like the woman with the full-on  Statue of Liberty replica (in shiny glitter, with red tissue paper off the top as the torch, and the text of Emma Lazarus’ “New Colossus” on the side).

There are some variations in the final numbers, although I think the tally of around 20,000 is fairly accurate, given my placement at the front and the fact that I spent I more than an hour standing on the Old Courthouse’s wrought-iron fencing, watching the crowds continue to stream in from blocks away. Along the 1.5 mile route, some people sang; others chanted. Many of us simply marched. I loved when we all got caught up in chants such as “Show me what democracy looks like | This is what democracy looks like!”

Although I didn’t get a picture, my favorite sign said simply “I am not a sore loser: I’m an informed citizen.” This is in part why I marched. There are many reasons why I marched, but I’ll close with this one: I have told my students many times this year that my hope for them is that they will become politically active and involved. I march to live that example.

Portland is a family friendly city. Whether it involves grabbing a beer or heading out to a cultural event, this city accommodates – even welcomes – children come along, thus exploding that old sexist notion that moms, in particular, should give up their social lives in particular once children enter into the picture. It’s one of the aspects I love about this place, and one of the reasons it made perfect sense for me to take my 7-year-old son and husband with me when I went to the Women’s March in Portland. Besides, my husband, a proud feminist through and through, wouldn’t miss the event for the world. The march started around noon, but there was a family pre-rally at 11 am.

We joined another mom who had two young kids in tow and headed down by bus with the goal of arriving at that rally before the main event. Before we left, I had cut out felt hearts to pin on each of the kids: in celebration of the ideals of love and more practically, one small way to better recognize the kids in a crowd. As the bus began to fill up along our route, our friend wrote her number on each of the kids. Snacks and raincoats and umbrellas (it was an especially chilly soppy day), we made our way.

The event began in downtown Portland along the riverfront a few blocks from the bus stop.  By the time we had arrived, the crowd had swelled well beyond the expectations of the planners, making it nearly impossible to get close enough the family pre-rally to hear the speakers. So we took the kids onto one of the bridges above the event to get a better look at the crowd and give them more breathing space. 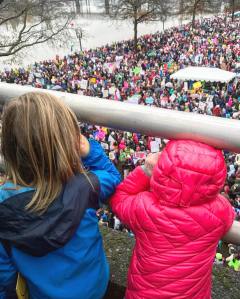 Marching with kids was a challenge but also a delight because we could watch the event through their eyes.The kids oohed. They spotted helicopters above. Drums played. Plastic covered signs bobbed about. From our spot we could see people pouring across the river on foot from the other bridges that dot the downtown. The crowd was immense – a brightly colored rainbow of rain coats and umbrellas, patiently waiting in the cold soppy mess.

This month we’ve been talking in our family about the concept of Strength – how strength need not be physical; how strength can involved standing up for yourself. One of the reasons we went to the march as a family was to show our son strength in action. And also – to help him understand how to be strong in his own values. Before we had left, we had worked on making a sign that would help him communicate his ideals, and after several options, he decided to celebrate his mommy, and to declare his enduring love for animals. While there, we worked on reading signs by others.

Because it was so rainy and cold we were only able to stay for the march’s beginning. The kids learned that marching in winter in Portland is a cold messy business. But Portland, as a community, didn’t seem bothered by the weather. From the perspective of the bridge it looked like the entire city was pouring downtown in solidarity. Unlike some of the marches across the country that seem dominated mostly by women, the crowd was a mix of all genders, young and old. Later I would hear that organizers estimated 100,000 attendees, which sounds about right. 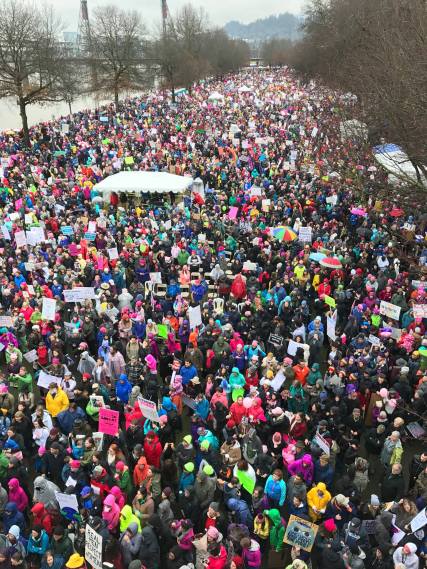 I marched in Nashville, Tennessee:  Music City and buckle of the Bible Belt.

These two things- our city being filled with both musicians and holy rollers (and the very special breed of person who is both), have often led to a bit of a tension when it comes to Nashville’s identity. And of course, that same tension was all over our city’s march. It is a tension between old and new, between values and ideas, between creativity and fear. And that balance is what keeps Nashville eternally surprising for both people whose grandparents’ grandparents are from here, and those who moved here last year from one of the cities bleeding hipsters and hipness.

And you could see that tension in the #PowerTogetherTN march. I’d wager most of us who attended could feel it in the 15,000-strong swell of people flooding the riverside park and spilling out onto the Pedestrian Bridge.

Several things I saw made me uncomfortable: anti-choice activists with their megaphones calling the women standing up for their rights Jezebels and whores, white women with their pink pussy hats and ovaries painted onto signs which implied that being a woman was intrinsically tied up with possessing a vagina (yeah, no), and every shade of white feminism under the sun. Okay,  good for them, at least they are marching and learning the role of direct action in the democratic process, and thanks to the super powerful amazing and impressive organizers of Nashville’s march, maybe they would absorb some intersectional values along the way.

And I did see plenty of those, and they made me proud of my  city. The organizers ensured Spanish and ASL interpretation, as well as accommodation for folks with physical disabilities. And they centered the experiences of women of color, undocumented women, trans women, queer and Muslim women. We heard from some truly inspirational people, who reminded us that NOW is the time to center and protect our most vulnerable and fight to keep them safe.  My heart soared to see speakers representing Black Lives Matter,  and Showing Up For Racial Justice, and Planned Parenthood, and Gideon’s Army, and Worker’s Dignity, and Tennessee Immigrant and Refuge Rights Coalition, and more. Fierce woman after fierce woman got up and screamed her truth into the megaphone.

And we marched. And we filled the city with our chants and our bodies and our placards. And we will continue to fill the city until we are seen and heard.

One thought on “A Woman’s Place is in the Resistance”